Join Adventure Consultants as they return to the frozen continent for their twenty-seventh season climbing Mount Vinson, Antarctica's highest peak. 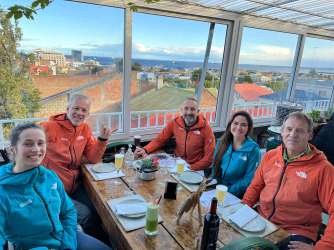 I am very happy to say that after a hiatus of 2 years the Adventure Consultants Mt Vinson expeditions are again operating! The first team for the season has arrived in Punta Arenas today with the intention of flying into Union Glacier, 500km from the coast towards the interior of Antarctica, in two days time. From there we will fly by ski plane to Vinson Base Camp. There we will establish our base camp over a couple of days before we commence climbing. 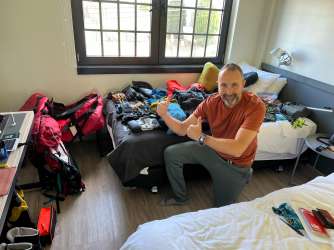 The team is made up of Beatrice and Frederic from Quebec, Vlado from California, Margarita who resides between Germany/Amsterdam, and expedition leader and owner of AC, Guy Cotter. We will keep you posted on our progress along the way as we enter the most pristine and incredible continent on earth. To reach the summit of the mountain is our objective, but our passion is to immerse ourselves into this incredible landscape and journey amongst the most raw and sometimes hostile conditions nature can throw at us. 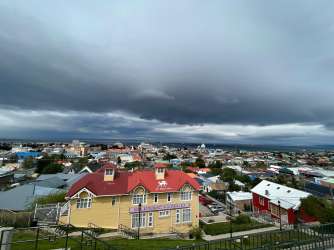 Please check in regularly as we will attempt to update the news each day via satellite links so you can see our progress. This is Guy Cotter for the AC Vinson 2022 expedition.

Photos (Top L) The expedition team celebrates arriving at the start point, recognising the comforts will soon be a distant memory! (R) Vlado does a gear check, don’t forget the toilet paper because the next shop is thousands of miles away, and (L) Punta Arenas, not quite the end of the world!

Who would want to climb the highest peak in Antarctica anyway? 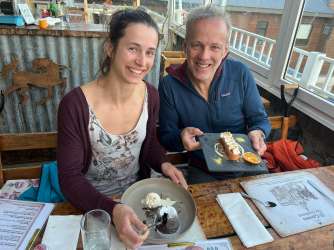 It’s a question. Who does have the motivation to travel to the coldest place on the planet to attempt its highest peak? On this journey I am joined by 4 great folks with heaps of enthusiasm and buckets full of energy for the upcoming adventure. We have a father/ daughter duo named Frédéric and Beatrice from Quebec who are well used to the cold and have been pursuing their athleticism and climbing/skiing/adventuring for all their lives. (I think I know who will be carrying the heaviest loads :-)). 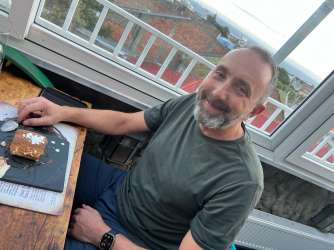 Venturing from California is Vlado, a keen outdoorsman who we met when he climbed Aconcagua on an expedition with us a couple of years back, a guy who is all about the experience and being a valuable team member. We were joined yesterday by our final member of the group, Margarita who is originally from Colombia but lives in Europe and gets onto the big peaks whenever she can carve out the time.

Then there is me, Guy Cotter, expedition leader and long time mountain guide who was first here on Mount Vinson 28 years ago in 1994. Back then the logistics were pretty basic, we waited 12 days for weather to clear before we could fly down there then rushed up the mountain before the next storm hit. There were 3 other people on the mountain at the time as mountaineering was a bit of a fringe sport back then. 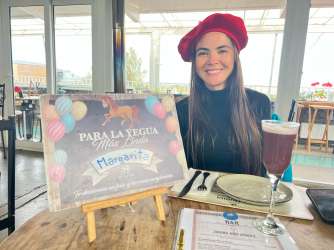 The plan is that we fly to Antarctica tomorrow night. Preparations have been ongoing and gear should be packed into the aircraft in the morning. It’s getting exciting folks, but nothing like the excitement we will feel stepping off the aircraft into the interior of Antarctica!

Photos: (Top L) Father and daughter team Beatrice and Frédéric carbo-loading before the expedition, (R) Vlado also sneaking in a treat before departure and (L) We started the expedition with a celebration with Margarita on her birthday! by Guy Cotter. 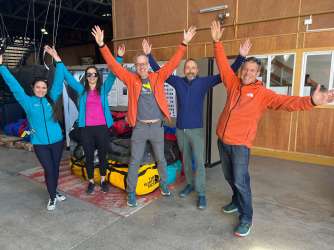 We have been given the call that our flight to Antarctica will commence tomorrow morning which is very exciting. At this point the weather looks favourable in Antarctica and the forecast holds. All going well we should be in Antarctica by this time tomorrow. We’ll keep you posted!

Photos: (L) More than a little happy at the news we will fly! (Below) We will say goodbye to Punta Arenas and the ocean a while, and Time to roll Freddy onto the plane by Guy Cotter. 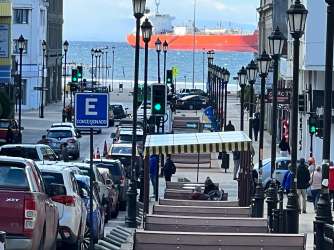 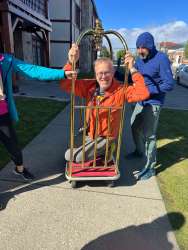 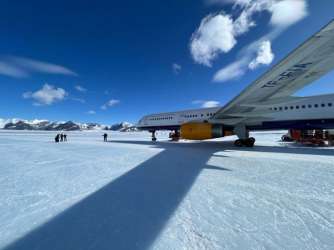 Departing Punta at 10am we flew over the Drake Passage that separates South America from Antarctica which featured views of the peaks on the Antarctic Peninsula. The flight path took us over the flat white of the Antarctic ice sheet for a further 500km inland to land at Union Glacier. The weather was so clear we had fantastic views of the Ellsworth mountains as we came in including Mount Vinson itself. We will stay at Union Glacier overnight and then hopefully head to Vinson Base Camp tomorrow. Woohoo, we are here! Guy Cotter for the AC Vinson Team.

Photo: On the blue ice runway at Union Glacier by Guy Cotter.

Flight to Vinson Base Camp 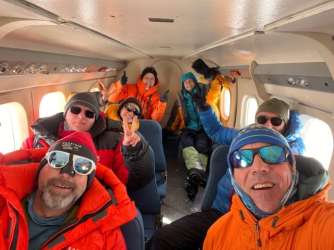 The weather held yesterday enabling us to fly to Vinson Base Camp, a 40 minute flight into the stunning Ellsworth mountains. The aircraft landed softly on the snow runway and we climbed out to be greeted by a warm and windless afternoon.

The first job was to find our cache of food and tents, buried in the glacier in early 2020. A marker wand indicated where it should be. We dug and dug and dug until we had a huge hole 4m deep. Eventually my probe struck what had to be our gear, a couple of meters away from where we had been digging so we dig some more until we had it all. However, it still took a further 4 hours to establish our camp and have a dinner at around 12.30am, not an issue in the 24 hour daylight we enjoy here. Next morning we enjoyed a leisurely start to the day as we waited for the warmth of the sun to come around the mountain. The shade can be brutal so we endeavour to complete our activities in sunny conditions only. Our plan tomorrow is to move to our low camp, some 7 hours walk up the glacier. This is Guy Cotter for the AC Vinson Expedition.

Photo: Aboard the flight to Vinson Base Camp by Guy Cotter. 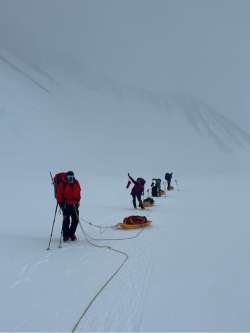 They say the forecast doesn’t have much affect on the weather in these parts so we left Vinson Base Camp into a forecast strong wind but it never eventuated.

it took us 5 hours to pack up at base camp and hit the trail and we were walking by 2pm. The route to low camp ascends a wide glacier where perspective is hard to gauge and features that appear close are actually many kilometres away. We made good progress as a team and reached low camp at 7.30pm which is a pretty good time. We then had to set up camp and drink and eat which took us the next 6 hours. It’s getting on for 2am now, so better get into the sleeping bag for some sleep.

This is Guy Cotter signing off for the day. 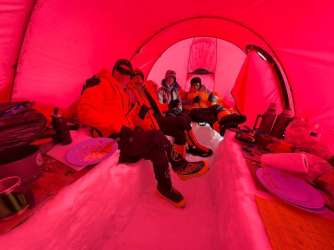 Today was always going to be a rest day so we made the best of that prospect, until the wind sprung up suddenly. We quickly mobilised to build walls from blocks of snow we cut from the glacier surface. No sooner had we constructed said walls when the wind dies down again. The plan is to head to high camp tomorrow, pending the forecast which at the moment is telling us the conditions at high camp will be 20 knot winds at minus 22 C. No thanks. We’ll get up in the morning and see what conditions look like up high before making a decision to leave it another day, always the alpinists conundrum. The team is in good spirits and motivated to continue the adventure.

Good night from Guy Cotter and the AC Vinson Team.

Photo: The team relaxing in the dining tent by Guy Cotter. 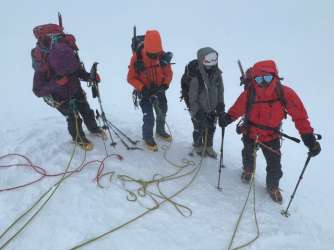 The weather was unstable with wind aloft when I woke up at 9am this morning so I wasn’t confident we would go to high camp today. The forecast came in around 12pm, which reinforced that decision so we made a foray to the base of the fixed ropes, about 30 minutes from camp, to do some training in the skills required for us to climb the 800m to high camp. The winds that had been hammering the mountain high above us descended upon us and we found ourselves in a maelstrom of extremely cold blowing snow that was somewhat uncomfortable so we raced back to camp with freezing digits and glad we had our tents close by to shelter inside. Of course an hour after we had returned the weather cleared into a pleasant evening. So we’ll look out the door in the morning to suss the weather conditions, the tell tale signs of winds are snow plumes of blowing snow off the ridge by high camp so we do have some indicators of what is happening up high.

Nighty night from Guy Cotter and the AC Vinson Team

Photo: The team out and about in the storm by Guy Cotter 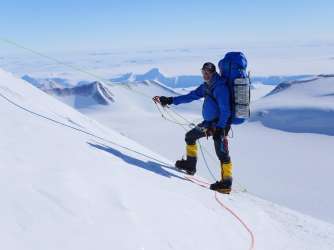 Yesterday we completed a carry to the top of the fixed ropes that take us some 800m up a snow arête that leads us towards high camp. We returned to low camp for the night and the weather is looking good for our move to high camp tomorrow. It will take us a few hours to break camp. Once on the move we will heft our packs up the fixed ropes again. The climb will be slow and gradual and probably take us around 8 hours, but will put us in position to make a summit attempt next day if the weather allows. The team are all excited and ready for the adventure ahead, albeit with a few nerves thrown in! 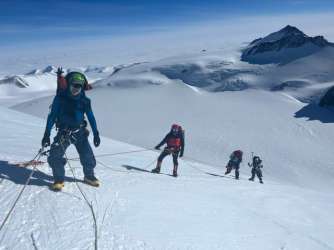 You could not ask for a more glorious Antarctic morning than we had when we awoke this morning. The winds had died down and the mountains around us appeared vivid and clear. We departed Low Camp at 1.20pm then ascended 1,000m to High Camp at 3,780m. In the morning we will embark on our summit attempt which will be amazing if the weather holds.

It’s already 12.30am and I get up at 8 so I’d better catch some shut eye. Guy Cotter for the Vinson Team.

Photo: The team climbing the fixed ropes between Low and High Camps by Guy Cotter 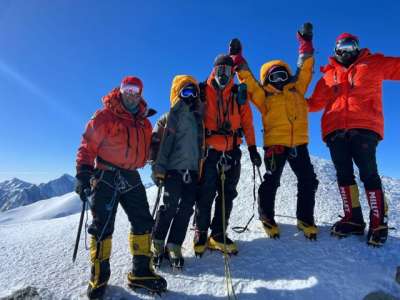 We got away from camp by 10am to begin the long ascent to the highest point in Antarctica. It was minus 30C and a light breeze of about 10 knots made for cool conditions! We wrapped up before embarking on the spectacular summit ridge which provided us views in all directions through this incredible landscape. We finally touched the summit at 7pm where we spent half an hour taking photos and soaking in the views. We turned for camp arriving 10.30pm. Tomorrow we drop to base camp to begin the journey home.

This is Guy Cotter signing off for the AC Vinson Team.

Photo: The team on the summit of Mount Vinson by Guy Cotter. 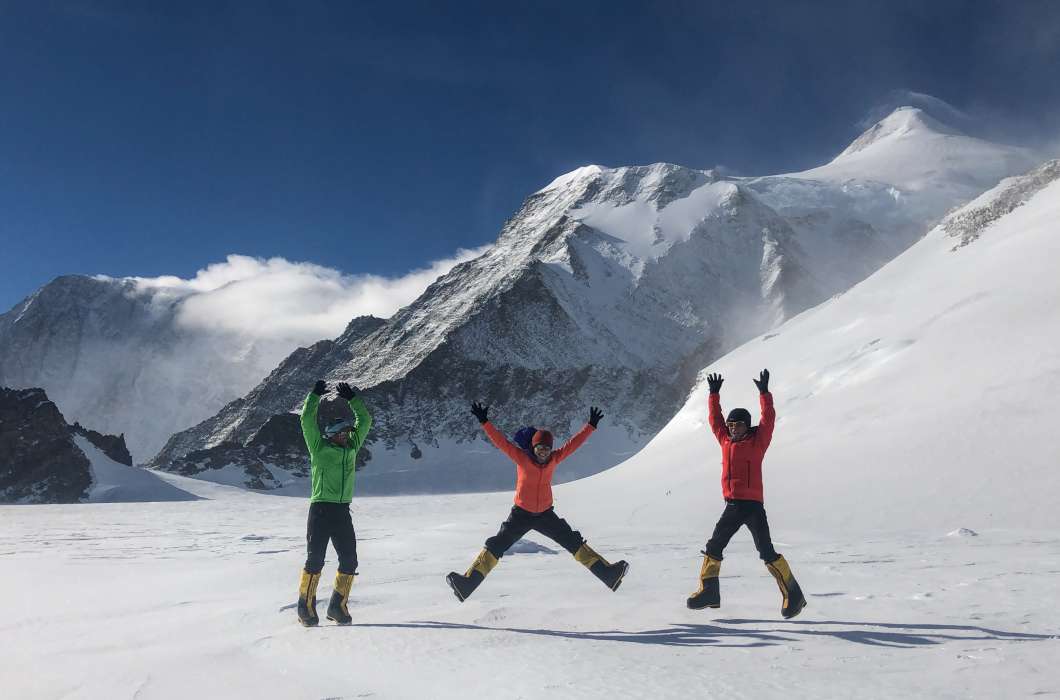