5 December 2007
I arrived into Nairobi with Suze to complete a reconnaissance on Mt Kenya so we can start to operate expeditions to climb the second highest peak in Africa. We were met at the airport by Lusega, who kindly took us into town to the Herron Court Hotel which is close to downtown Nairobi. Later, after a swim in the pool, we took a cab to Carnivores restaurant, apparently one of the 50 best restaurants in the world which I gather is because of its exotic nature. As the name suggests they specialize in meat and a large fire pit fills the entrance hall where sweating cooks prepare all sorts of meat on long shish kebabs. I never thought I’d be eating crocodile meat (the natural order is usually the other way round!) and there were other weird and wonderful treats to try out. Jet lag set in and we returned through the city to the hotel.

6 December 2007
Today we drove to the base of Mt Kenya and it was really interesting to travel from the dry and scrubby plains of Nairobi up through the vegetation band and onto the high savannah on which Mt Kenya sits. We arrived at the Naru Moro river lodge for the night which is a sweet getaway with its small bungalows and immaculately kept gardens with all manner of flowering trees and shrubs. A short trip up the road to the equator after lunch fulfilled the quandary in my mind about what effect the Coriolis force has on water right on the equator. Water will rotate one way as you flush the loo in the southern hemisphere and the opposite in the northern hemisphere, so what does it do right on the equator? You’ll have to go there to find out! 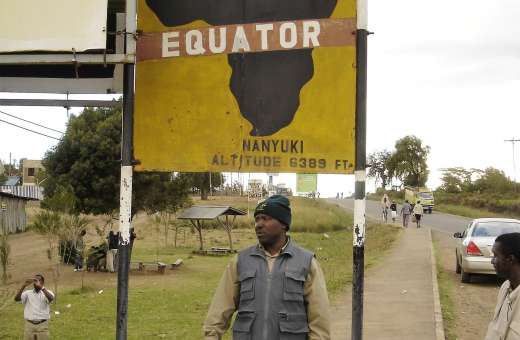 7 December 2007
We haven’t actually seen the mountain as yet. As volcanoes in equatorial regions tend to do, there is a lot of cloud on the lower reaches, the moisture feeding the rain forest below. So it was up into the cloud we went to the park ‘gate’, or entrance, at 2,380m/7,808ft. The national parks system here is well ahead of much of Africa as they banned hunting safaris way back and the park rangers are well armed and organized to deal with poachers. We trekked up the hill on an old road through the forest for 3 hours while listening to our local guide Mawe tell tales of wild animal attacks and other such horror stories in his attempt to make us appreciate his company all the more!

A well-organized camp site at Met station (3,000m/9,850ft) is the site of our first night on the mountain. After a good feed we sit around at sunset watching the antelopes and blue monkeys roaming around the forest. 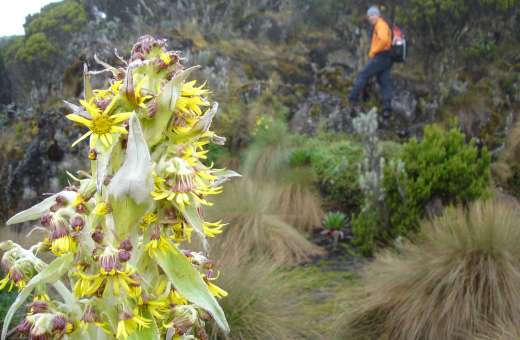 8 December 2007
The sun shines brightly after the overnight rain clears so everything has that fresh look in the morning. We trekked further up the track through the dense forest that is not too dissimilar to the forests in New Zealand’s west coast. However, as we climbed higher we left the forest and entered into a section called ‘the vertical bog’ which is a wetland swampy area that had a botanical garden feel to it as if it’d been landscaped to look beautiful and natural. Bizarre plants would appear out of the mist that had settled such as the ostrich feather that is a 2m high plant with soft drooping leaves that look like (you guessed it) ostrich feathers. Then there were many varieties of lobelias and tussocks and even red hot pokers, a plant that adorns many gardens back home. The giant senecio trees make me wonder whether Dr Seuss came here looking for inspiration as they certainly look like they’ve been created by an imaginative artist.

After a long uphill ascent, we arrived into Mackinder’s camp at 4,200m/13,800ft. It’s more than a camp, it’s a large stone hut with multiple bunk rooms and it’s set up to cater to the large trekking groups that come through here. Out the window there are great views of our objective, the magical twin peaks of Mt Kenya! I used to read books about world climbing that showed pictures of the Diamond Couloir on Mt Kenya and here it was right in front of me! I love that feeling of getting to know a mountain, or a route on a mountain, and then actually getting to go there and see it in person. It always seems so much better in real life yet somehow the essence of it leaps out of the pages of those books and makes me realise that these are places I just HAVE to visit. The Diamond is a thin trace of ice that parts the lofty rock buttresses of Kenya leading into a small snowfield that sits between the peaks of Batian on the left and Nelion on the right. A small glacier at the base is only there because of all the snow that comes down the couloir and it’s comforting to see that even the effects of global warming haven’t made it disappear completely yet. Small creatures called hyrax scuttled around us as we enjoyed the orange sunset sitting on the rocks outside. It was actually all a bit good!

9 December 2007
A nice trail in perfect weather leads us up and around the right side of the mountain until we are beneath the base of Nelion peak and close to Lenana, the easy trekking peak sold as an ascent of Mt Kenya to trekking parties. At 4,700m/15,400ft, we arrive at Austrian hut and it’s just across the Lewis glacier to the base of the climb we’re planning for tomorrow. The usual afternoon snow showers come in. 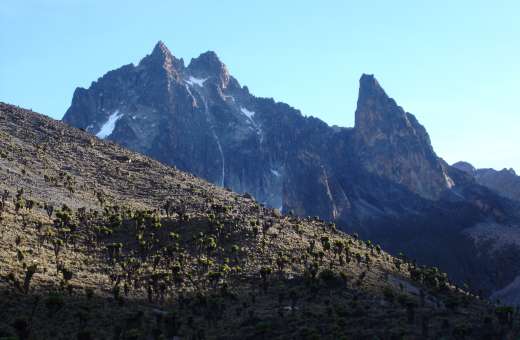 10 December 2007
Awake at 4am and away by 5am in the dark. In a few minutes we don the crampons and shoot across the glacier then hike up the hill for 30 minutes to the base of the route. As we rack up the climbing gear the dawn breaks and we can see endless sheets of orange rock glowing beautifully above us. It’s chilly, I’ve got all my layers on but I soon warm up as I run the rope out for the first pitch. Suze follows swiftly and soon we are sharing the belay and looking at the next section.

This is a route first climbed By Eric Shipton and Wyn Harris in 1929 and they skilfully interpreted the complicated rock formations to reveal a route that whilst convoluted, is mostly straightforward on the lower sections. Pitch after pitch follows and in a couple of hours we are at Baille’s biv – a sheet of roofing iron formed into a small shelter on the steep face. We stop for a snack and look over the ridge where the route leads into steep and formidable towers that lead towards the top. Soon I’m battling away with the crux pitch, De Graaf’s variation (which apparently is easier than the original line through here) at grade 16 (5.10), and whilst that’s no problem at sea level in rock shoes, up here with a pack on and heavy boots I was breathing a little heavier than normal!

Several pitches of interesting climbing followed by a rocky gully lead us to the summit. The mist rolled in so we aren’t rewarded with any views and we were conscious of the afternoon snowfalls so we soon left and descended the route back to the base. Right on sunset we arrived back at the base to return to the hut tired but happy. 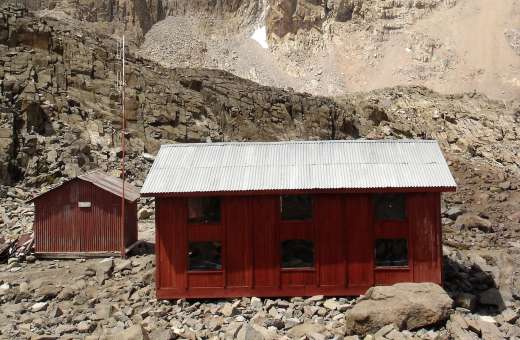 11 December 2007
A nice stroll up to Lenana Peak works the lactic acid out of the system after yesterday’s exploits. We are met by massive views in every direction and we can see down the Sirimon Valley to the east with its big walls and interesting looking forests. If only we had the time to explore it all! We descend around to the north side of the mountain and down into Mackinder’s valley, passing the climbing routes on that side and making plans to return in another season to complete these climbs. The descent takes us to Shipton’s hut then we continue all the way out to Old Moses hut, running into a few trekking parties on the way. Late that night we drive into Naro Moru village and stay in the Sportsman’s Arms Hotel, fortified by a shower and clean clothes.

12 December 2007
We return to Nairobi and visit the animal orphanage that is akin to a small zoo. Surprisingly we are invited into a cage where three cheetahs are feeding and the zoo keeper encouraged us to pat the big cats, something I never thought in my wildest dreams that I’d ever do. The following day we are to leave Kenya which seems all too soon. There’s so much to see and do here that I guess we’ll just have to come back. It really has been a nice adventure on the mountain and in the country itself. Mt Kenya has such unique plant life and the backdrop of the twin peaks of Kenya make it all the more dramatic and exotic. I can see why Eric Shipton was drawn to the area in the early days, before it had become known, but for me going there this time, I’m sure I felt at least some small portion of personal discovery that Shipton must have felt. I don’t think we need a specific reason to travel across the world to climb mountains, see new sights and meet new people but for me at least, it makes me appreciate life and increases my understanding of the world we live in. 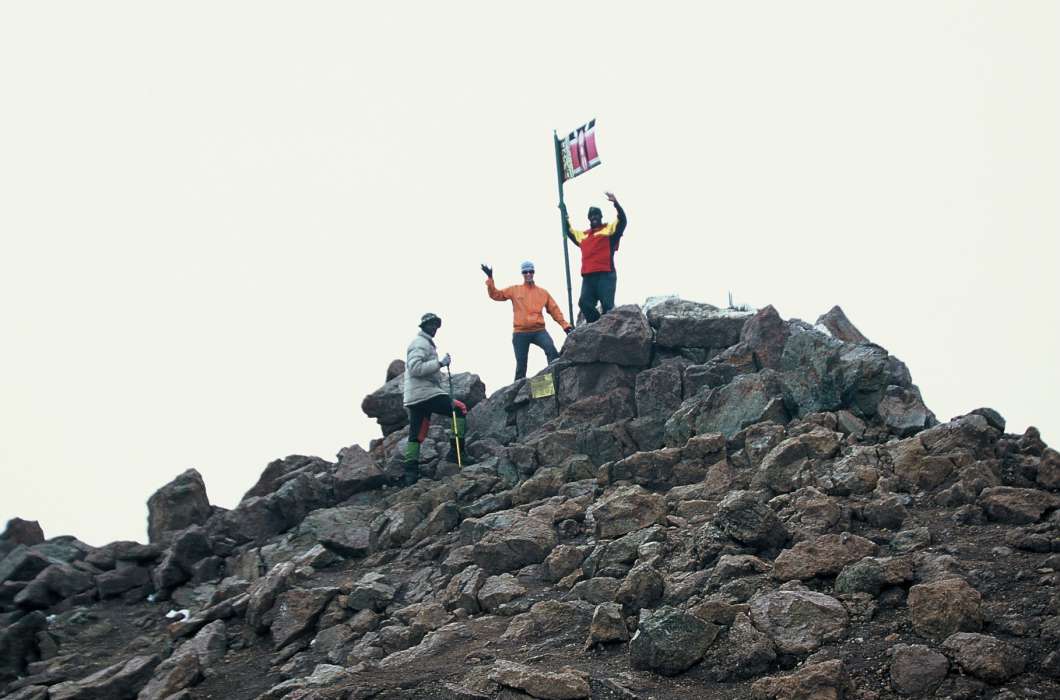