The Adventure Consultants Kilimanjaro Expedition July 2005 set out to climb 5,895m Kilimanjaro in Tanzania, the highest mountain in Africa.

10 July 2005 - Positioning Ourselves for the Summit attempt
This morning Ralph decided to head down to Mweka Camp rather than attempt the summit. He plans to wait for us at this location and then join the remainder of us for the final descent. Meanwhile Sam, Nick, Danny and I, along with our entourage of porters and two local guides Justaz and Philbit, headed up to Barafu Camp for our summit attempt. A perfect blue sky day had cameras in overtime and offered the opportunity for sunbathing at Barafu Camp. We had an early dinner and plan to awake for the summit attempt at 11.15pm! Best try and catch some sleep.

In anticipation of a big day tomorrow, this is Mike signing off for the AC Team. 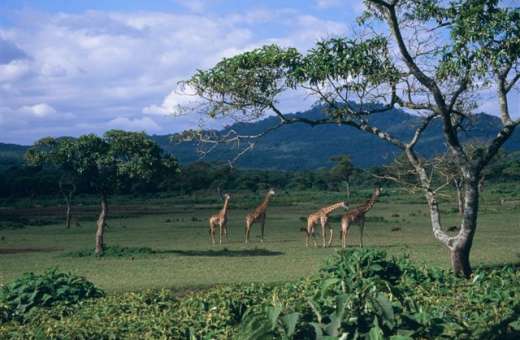 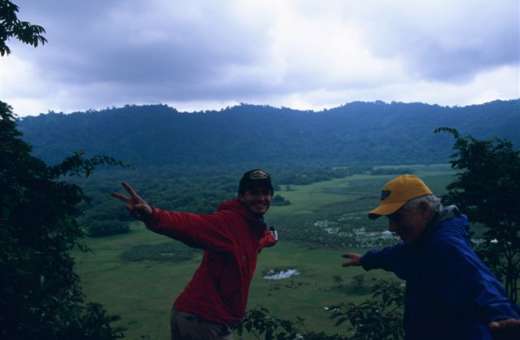 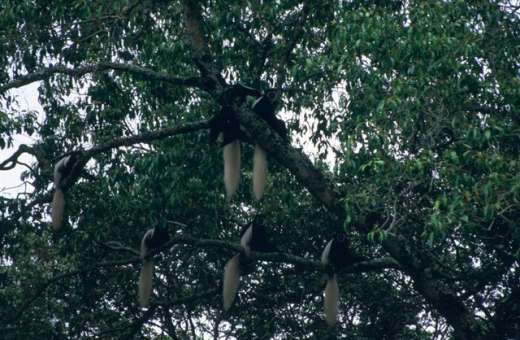 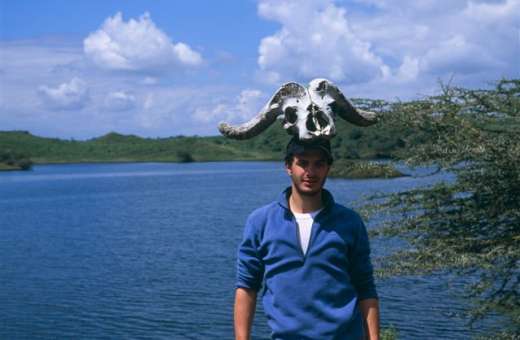 13 July 2005 - Safaris and Farewell
Today Sam and Dan headed off on a multi-day safari to some of the legendary Tanzanian locations such as the Serengeti and the Ngorongoro Crater.

With one day to spare, Ralph, Nick and myself headed out on a single day safari to Arusha National Park. This under-visited National Park is a wee gem that has Mt Meru as centre stage. While not having any of the large predators, it has a wide range of wildlife and is big enough to have a herd of some 500 elephants. We saw giraffes, zebras, buffalo, monkeys, antelopes, hippos and many other species of African mammals. Our Maasai Guide had many interesting stories to tell of life among the Maasai in the modern age.

This will be the final dispatch for this Kilimanjaro expedition. Thanks for following these reports and tune in for future expeditions.

Until next time, this is Mike Roberts for the AC Team 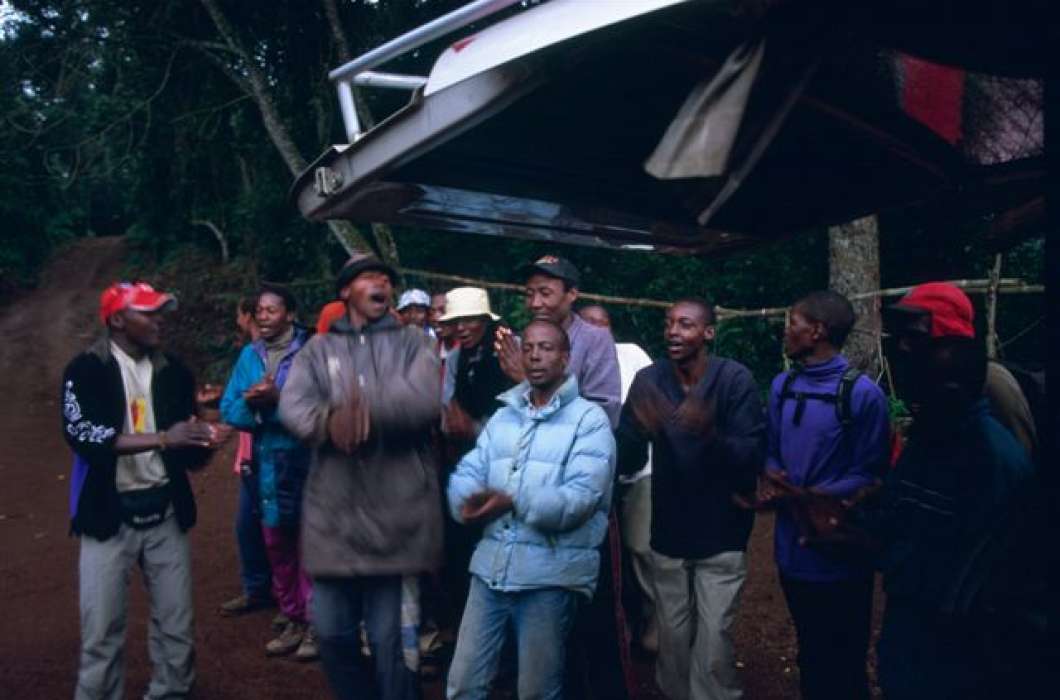 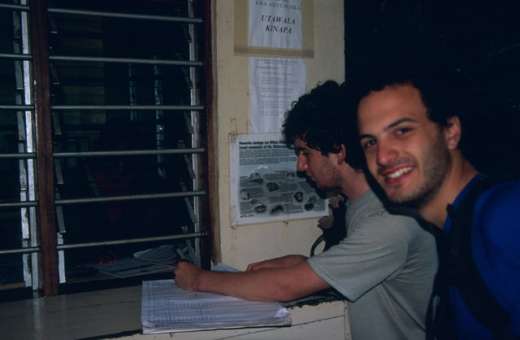 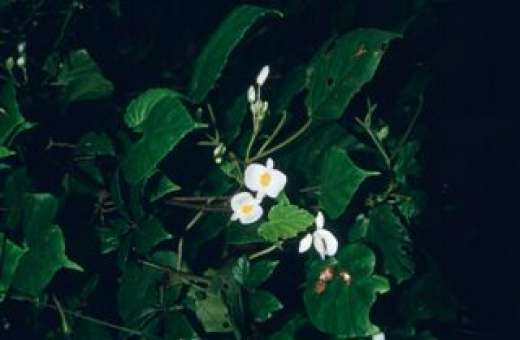 12 July 2005 - Descent and Celebration
Greetings all! We awoke to the familiar banter of our porters preparing breakfast and packing for our descent. It was obvious they were happy to be returning home to their families. A 2½ hour walk down through heather and forest brought us to the road end. After registering our ascent with the National Park authorities we were issued certificates. Then we had a brief farewell ceremony with our porters and local staff before driving back to Arusha and a hot shower. In the late afternoon we took a brief stroll through Arusha to catch up on e-mail and to bargain for local crafts and gifts. Indian was voted as the favourite for our celebration dinner. I would like to say thank you to our Arusha based outfitter, Tropical Trails, for all their help. Replete and ready for sleep, Mike. 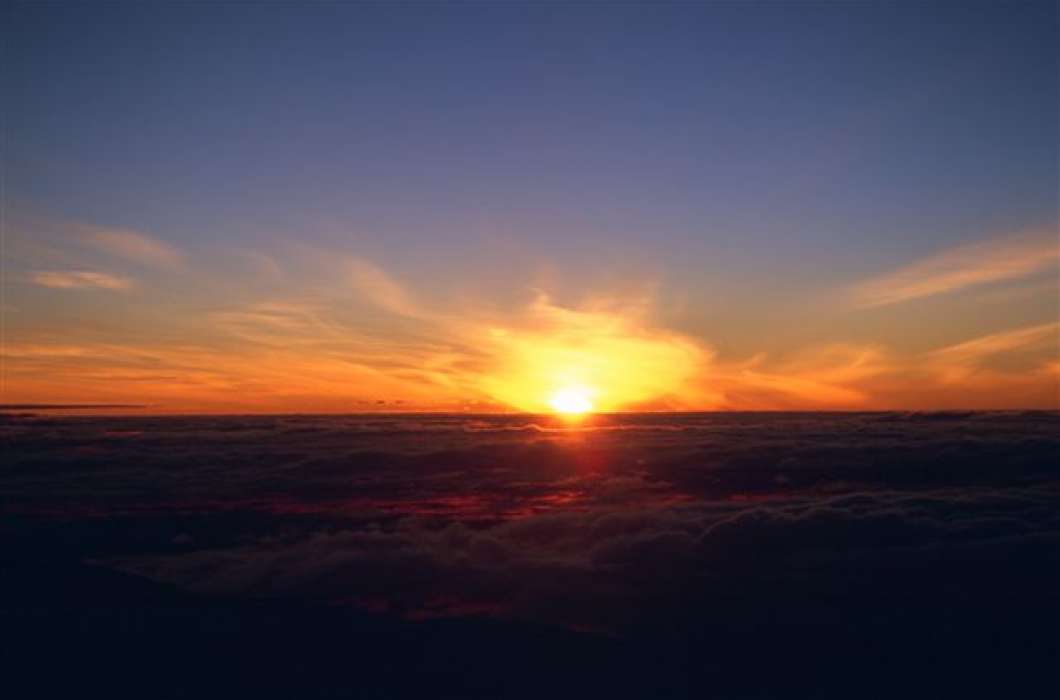 Nick, Sam and Dan all put their extensive skiing experience into practice during the 1,000 metres of scree running on descent. They were all very agile and fast. Sure enough, 200 metres above camp we descended into dense cloud and snow. The name Barafu means snow/ice and it sure seemed appropriate. To think we had been sunbathing at this location only the day before! After packing, rest and some brunch we descended a further 1200 metres to Mweka Camp where we met up with Ralph who was very happy at our success and to see us safely down. A fantastic day was had by all.

Time to catch some sleep, Mike 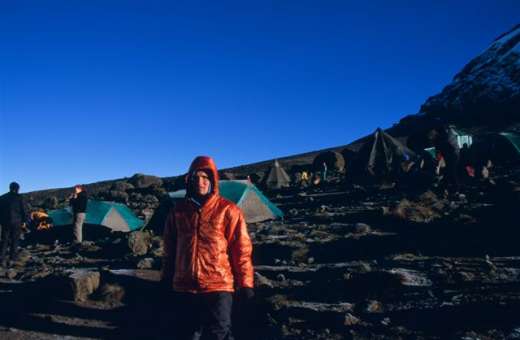 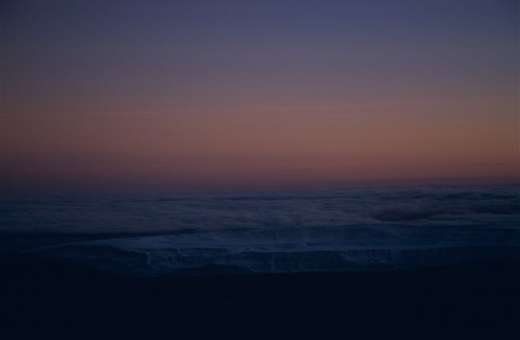 11 July 2005 - The Roof of Africa
Much to our dismay we awoke to freezing rain and low visibility! This is not what summit day is supposed to be like. Nevertheless we had breakfast, talked about how little sleep we had actually managed to get, donned packs and headed out into the abysmal night at 12.30am. Great care was required as the rocks were very iced up. Dressed in rain pants, parka, hats and gloves we persevered with the terrible conditions. Some 200 metres above camp our efforts were rewarded when we broke out of the cloud into a starry night. In fact, the milky way stood out in incredible brilliance. We could see the lights of small towns on the Kenyan border. Blustery conditions ensured we remained dressed warmly as headed into the Arctic Zone. By 6.30am we reached the high point known as Uhuru (freedom) Peak. Minutes later we were treated to a spectacular sunrise. After half an hour of furious camera clicking and whooping it was time for the descent. 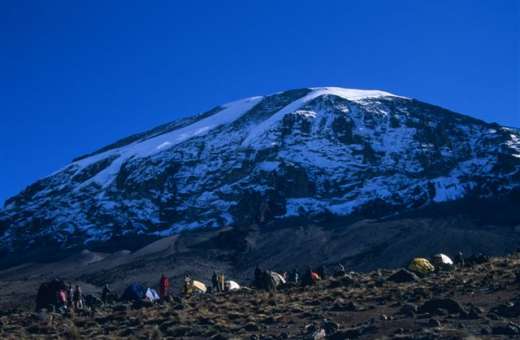 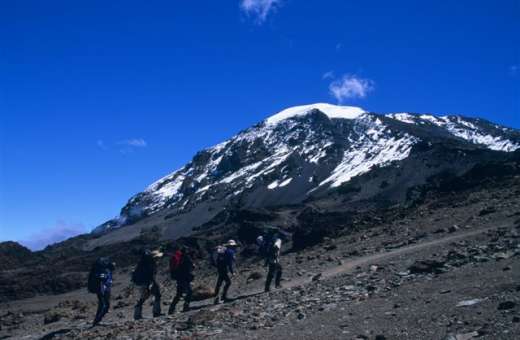 Following are the daily dispatches from our July 2005 expedition to Kilimanjaro (5,895m) in Tanzania, Africa, with guide Mike Roberts.

4 July 2005 - Arrival in Tanzania
This is the first dispatch for the Adventure Consultants Kilimanjaro Expedition July 5 -12. There are four members on the expedition: brothers Daniel and Sam Wharton Lessin, their grandfather Ralph Wharton and a good friend Nicholas Josefowitz.

So far, Daniel, Sam and myself have arrived after spending a night in Nairobi. We were amazed at how compact Nairobi’s city centre is. You can walk around it in an hour! Daniel and Sam even managed to check out a local theatrical production.

Presently we are staying in a delightful lodge in the small town of Kia, Tanzania, which is situated in close proximity to Mount Kilimanjaro. Kia Lodge is composed of modern deluxe bungalows situated in quiet tropical gardens complete with swimming pool and recliners. Perfect for recuperating from jet lag.

Time to get some rest, Mike Roberts

5 July 2005 - Preparing for Kilimanjaro
Today all members transferred to the town of Arusha in preparation for climbing Kilimanjaro. Our accommodation is a peaceful eco-lodge called Karama Lodge, set beside a banana plantation. An afternoon foray was made to the boisterous central market of Arusha and related environs. One had to watch their pockets closely as we were almost accosted by locals very enthusiastic for a sale! Overall a relaxing day taking in the sites and getting some rest. Nick was our last member to arrive in the evening. Hurray for now, Mike. 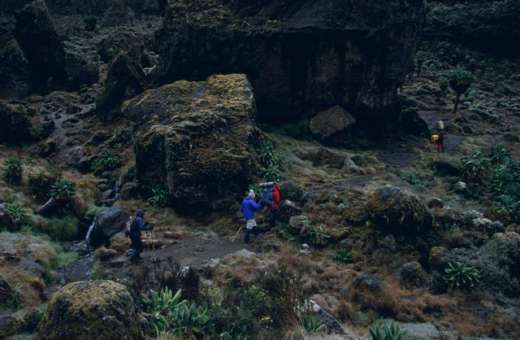 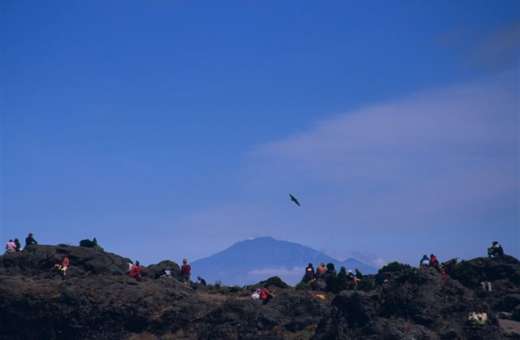 9 July 2005 - A Short Day to Camp Karanga
Today started with a stout climb up what is known as the “breakfast wall” to an altitude of about 4,500m. A devious route winds its way through the rock cliffs. One has to rock scramble a little here and there but nothing too difficult. Things are never boring when travelling with Sam, Nick and Dan; lively debate on politics and a wide range of subjects is guaranteed. The fervour of the debates mean they are not for the faint hearted! Ralph adds his occasional perspective, which is more in accord with stately wisdom from the ages. We reached Karanga Camp in time for a sumptuous cooked lunch prepared by Amos our Cook.

Overall, another good day was had by all with folks adjusting well to the altitude. Mike

8 July 2005 - A Misty Traverse to Barranco
Sam and I started the day by shaking ice off the tents and then partaking in our morning Tanzanian coffee ritual. The wafting mists of early morning had us running for cameras only to find the mountain vistas would once again become obscured in fog. Eventually, intermittent views through the mist enabled us to get some good pictures of Kilimanjaro’s receding glaciers.

Our high point for the day was 4,600m, beside a rock feature called the Lava Tower. By this stage we were in light snow with restricted visibility and the landscape was barren alpine desert. The Machame Route is not just a climbing route but it is a journey because you start from the south western side of the mountain and then traverse around to the south eastern side. Once at Barranco Camp (3,190m) we hid away in our tents for the remainder of the afternoon and listened to the sound of light rain falling. Please tune in tomorrow, until then, Mike. 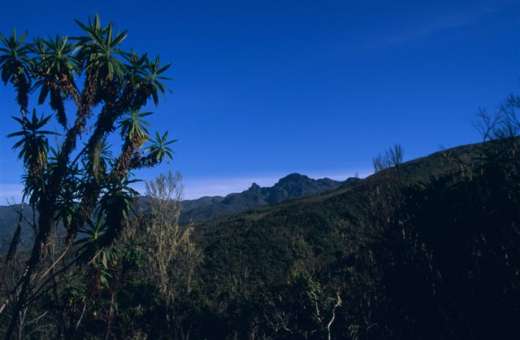 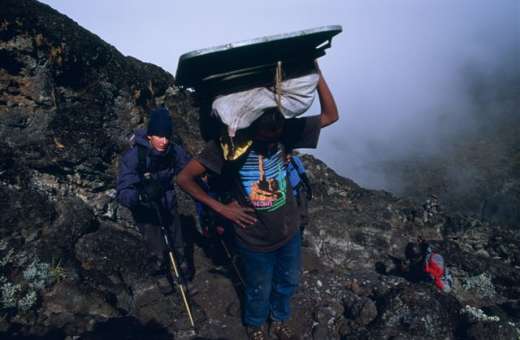 7 July 2005 - The Shira Plateau
Hi folks! We awoke to clear skies, bed tea (thanks to our porters) and the prospect of a relatively short day’s walk up spectacular terrain to the Shira Plateau (3,800m). And so it was. Kilimanjaro is composed of three separate craters, the oldest of which is Shira. Shira was the first volcanic centre to become extinct. Today we encountered some of the many wondrous plants in the moorland zone which include the unique three metre tall Lobelias and the Senecio Kilimanjaro, which look likes it belongs in a Dr Suess book. While the morning offered great views, afternoon brought some light rain and an excuse to read and relax in our tents. All members are in good shape and are exhilarated to be high above the plains of Eastern Africa.

Cheers from the slopes of Kili, Mike 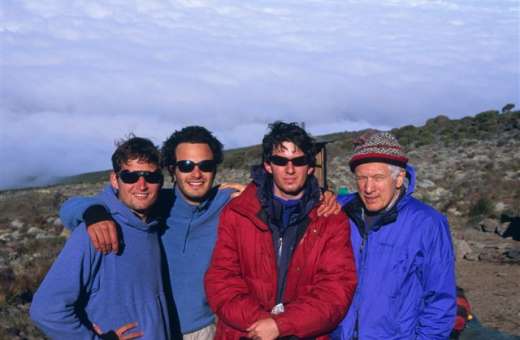 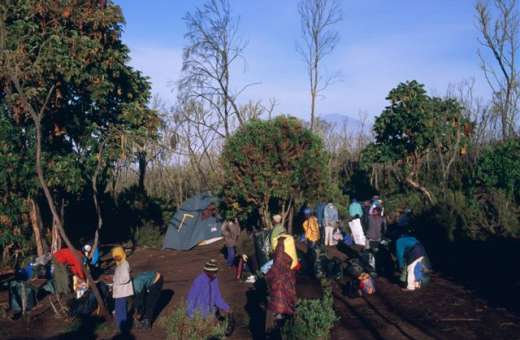 6 July 2005 - Up to Machame Campsite
Our day started with a drive to Machame Gate, the name given to the start of our hiking route. The approach bus drive took us through many small rural Tanzanian towns with economies based on bananas, coffee, maize and of course tourism. It is marvellous to watch the incredible agility villagers have as they gracefully carry large loads in balance on their heads.

After sorting out the loads for our fifteen porters, we donned parkas and began trekking through the dense dripping rain forest. Kilimanjaro is legendary for the rapid and varied changes in vegetation zones that one encounters. By the time we reached the top of the forest and entered the heather zone, the skies were clear and the glaciated summit slopes of Kilimanjaro were in view. After 1,200m of climbing we arrived at Machame Camp (3,000m) to find our porters had prepared tea and pitched our tents. Everyone was feeling well and happy to be on the slopes of Africa’s fabled mountain.

It is good to be underway, Mike. 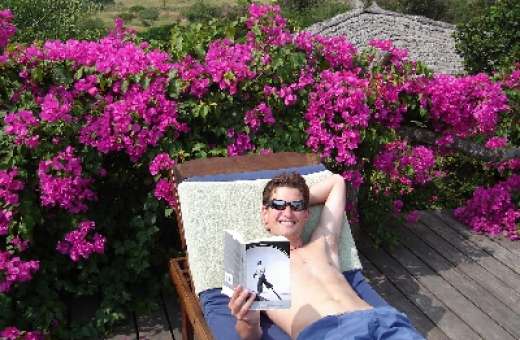 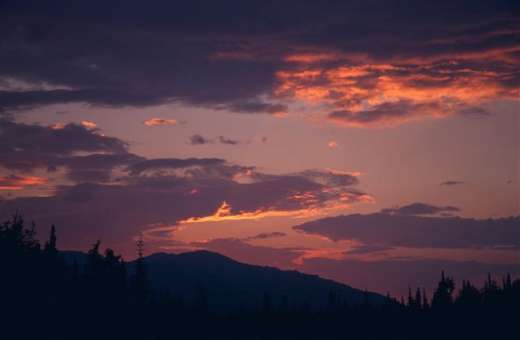 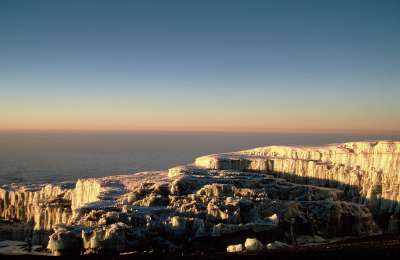 Dispatches - Kilimanjaro Expedition 2022
Adventure Consultants marks a return to Africa in 2022 with an expedition to climb Mount Kilimanjaro. 13th February - Today saw our team stand on the roof of Africa!...