18 July 2005 - Ecuador Volcanoes Expedition
Hola from Ecuador! The team met in Quito on the evening of July 15. Gear checks were done and the group went out for a dinner on the town in one of the many excellent restaurants. The next morning we headed to the Otavalo market to buy ourselves and our loved ones gifts from the awesome market. We stopped on the equator at 2,700m for a photo.

Day three was the start of the hard work. An acclimitasion hike up Cerro Pasochoa, a 4200m hill of tussocks and shrubs. The day was overcast but still warm with occasional clouds floating around. We got an amazing but brief view of Cotopaxi, the first of our serious expedition goals. The team did well, climbing the 700m in 3 hours with lunch on the summit before walking back to the car.

The remainder of the afternoon was spent emailing, washing clothes and hydrating in Quito before we leave the luxury of the 4 star hotel for the still luxurious mountain huts. Tomorrow we'll carry on our acclimitasion on Guaga Pichincha, at 4800m high, before heading onto the mountain for three days at the Cayambe hut and our first snowy peak. Let's hope the great weather holds.

We will try to do another dispatch within four days. 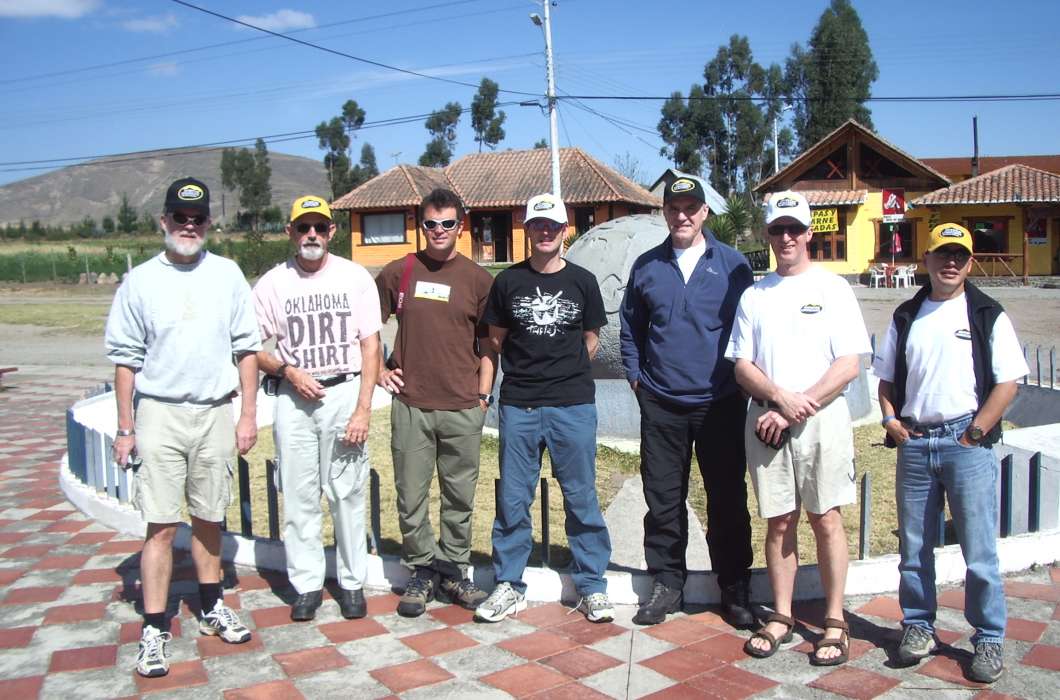 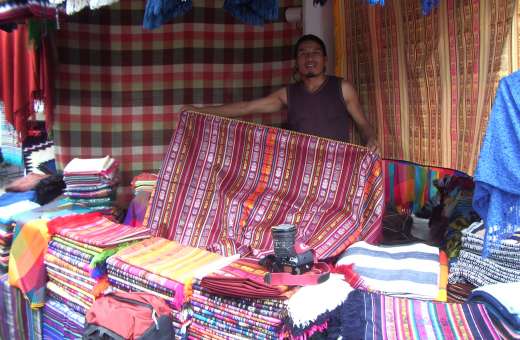 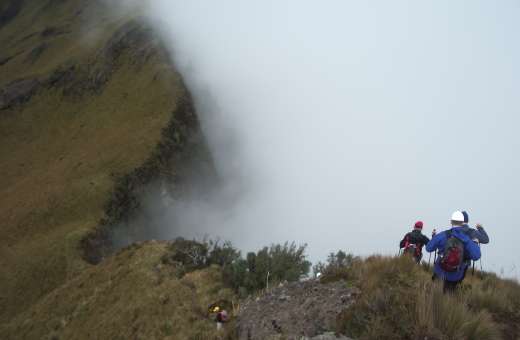 21 July 2005 - Cayambe attempt
Day four we climbed Guaga Pichincha (4800m approximately). The day was overcast and it was pleasant climbing. The whole team did great at the new high altitude. We had lunch behind a rock sheltering from the wind then ran down some scree slopes back to our vehicle.

We then drove to the oldest hacienda in Ecuador, built in 1570 - a great place with so much history. The photo is of our group at dinner.

Not much time to rest though as the next morning we drove up to the road end for our Cayambe attempt (5790m). One hour walking in the rain brought us to the hut. Our plan for this day, Day 5, was to do some mountaineering instruction but the weather had other ideas. We got up at 11pm for a weather check, but it was very bad, 60 to 80 knot winds and driving snow.

By the next morning the wind had died down slightly so we took a quick hike up to 4900m to check out the route. Unfortunately, it will have to wait for another day.

Now we are headed towards our second summit Cotopaxi (5911m). We have rearranged our schedule a bit to allow some more snowcraft instruction on the slopes of Cotopaxi before our attempt. It will be a few days until we get back to a computer. Ciao for now.....

Mark and the team 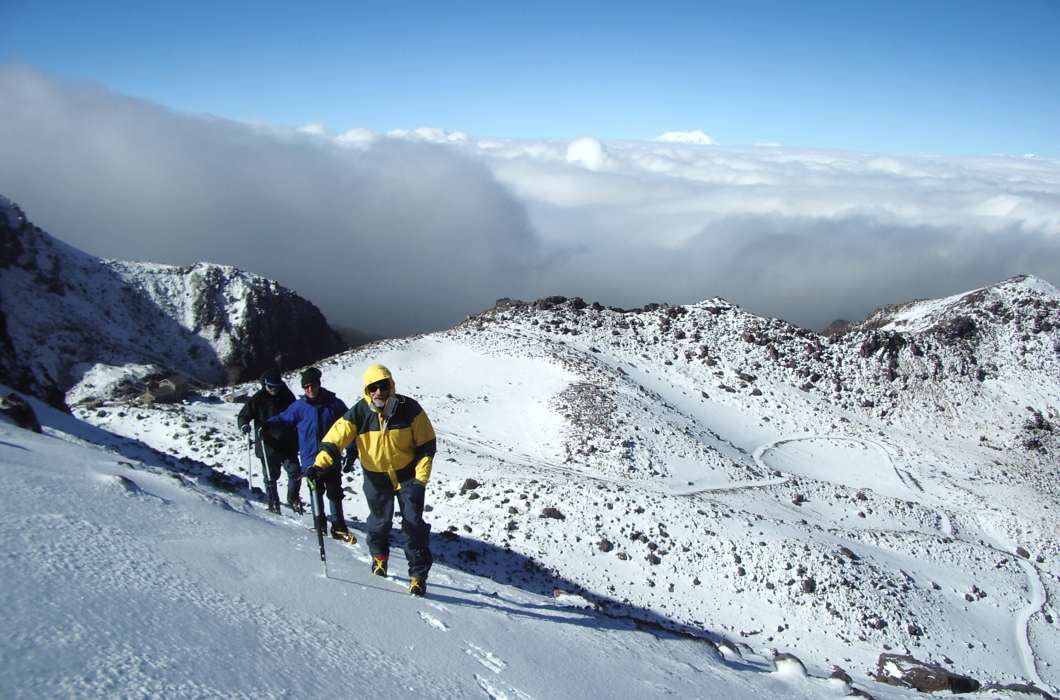 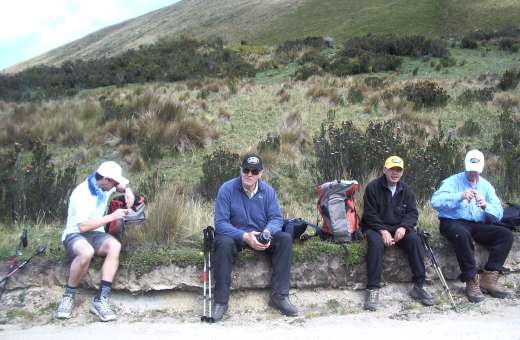 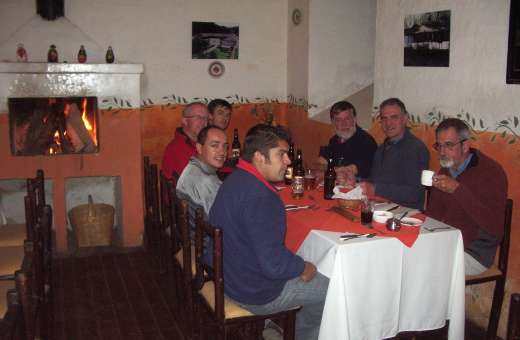 25 July 2005 - Off to Cotopaxi
Next we drove from Cayambe to the Pappyallcta hot pools. Life felt tough as we lay in the hot water, soaking what would have been sore legs, if the weather had allowed us to climb Cayambe. The hacienda was beautiful with hot pools right outside our rooms.

The next day was spent driving towards Cotopaxi. After dropping some gear at our hacienda at the base of the mountain we drove up to the carpark and hiked 45 minutes up to the refugio at 4800m. We left our sleeping bags and extra gear at the lodge and walked over to the glacier, only 15 minutes away. It was hard white ice and with crampons firmly attached to our feet, Mark and Edi taught everyone how to walk on the super hard, old ice. Some ups and downs, wobbly legs and scared looks eventually gave way to confident smiles and slight disbelief at how the crampons grip the steep ice. A small ice cliff collapse nearby saw a few white faces as it crashed noisily but harmlessly not far away. We ran back down the scree slope to the car and back to the hacienda for the night. 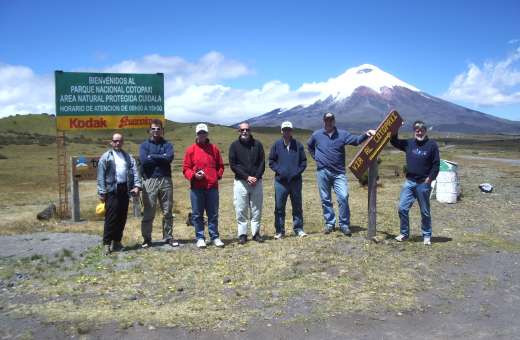 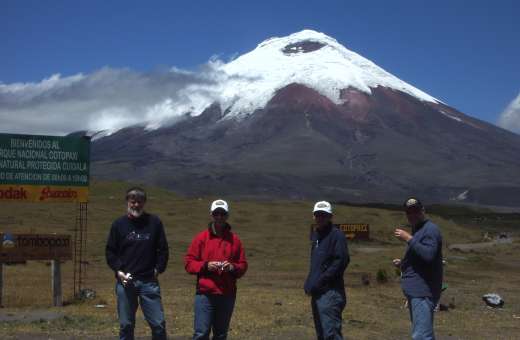 The hacienda we stayed in right under Cotopaxi was called Tambopaxi and was a new straw bale lodge with massive windows facing towards Cotopaxi. It was a mouth-watering view with the mountain standing proudly beyond grazing llamas and wild horses. Cotopaxi means 'Neck of the Moon' in English and we enjoyed the time to relax and plan the following night's climb...

Summit day started like a scene from a comedy film. Dave woke up, rolled over and woke up Graeme, who rolled over and woke up Ray, who rolled over and woke up Chris… they were out of bed, dressed, 10 minutes befote the alarm went off!! The group left at midnight under a full moon. Climbing up the soft scree, two steps up and one sliding back. Very hard work at 5000m! Alter two hours they were at the start of the glacier and once again bullet proof ice occasionally covered the rocks and scree. More extremely hard work, but the scene was magical. 50-60 climbers from all over the world displaying a trail of headlamps, with the lights of Quito shining in the background. Mark, Ray and Graeme were at 5400m at 4am, unfortunately very tired and extremely cold due to the howling wind.

The decision to play it safe overwhelmed the summit dreams and they decided to descend. Edi, Peter, Dave and Chris climbed on into the night. By 5.15am they were at 5600m and made the same decision to descend. Tired, but elated to have ggiven it a good shot, the group descended the mountain, watching the sun rise over the open countryside and city lights. They drove south to rest their wounds, shower and order a good bottle of wine (or two) over another fantastic Ecuadorian dinner.

The next day we drove to Lake Quilotoa, a volcanic plug filled with water and walked down into the crater. Then continued to the south towards Chimborazo. Although it is only Chris who plans on attempting the 6310m summit, the rest of the group will attempt a more reasonable 5000m summit nearby.

This is Mark, enjoying Ecuadorian hospitality, signing off. 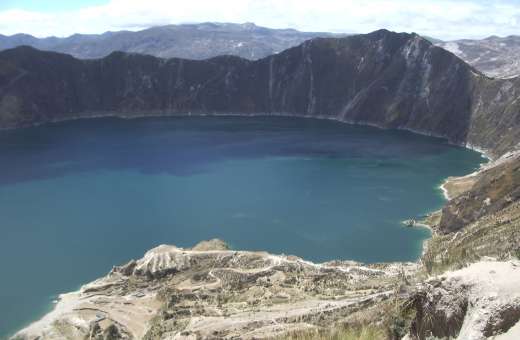 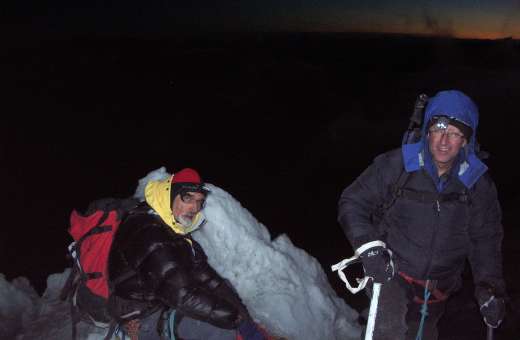 28 July 2005 - Summit Success... of sorts...
After leaving the volcanic lake we drove to another fantastic hacienda, Urbina Lodge, our favourite yet. Just not much time to relax because the next morning we drove to Carrel Hut on Chimborazo's flank. While Chris relaxed with our new guide joining the group, Maurizio, the rest of us went for a climb up past the Whymper Hut and onto the Whymper Ridge to an altitude of 5400m. The ridge is the route used by Edward Whymper who made the first ascent of the mountain back around 1880. 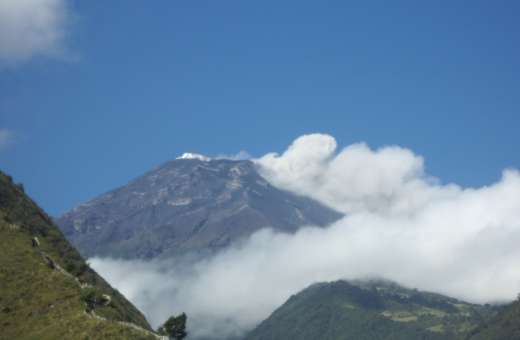 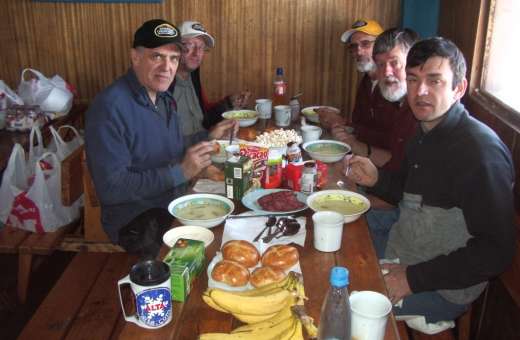 The views are just amazing, looking up at the melting glaciers and red and orange volcanic rock. The climbing route is long and hard and our part of the group are happy to be attempting another smaller peak tomorrow...

Chris and Maurizio got up at 11pm and left at midnight. They climbed quickly and made the summit by 6:30am. We spoke with them via radio and they were estatic, sitting there at 6310m watching the sun rise. Chris said he was completely exausted and struggled slowly back to the hut before collapsing on his bunk asleep, but with a slight smile on his tired face.

the rest of us got up at a leisurely 5am and drove around to the other side of the mountain to attempt Carihuairazo, 5020m. To our disappointment, we drove around into a cloud backing up against Chimborazo. 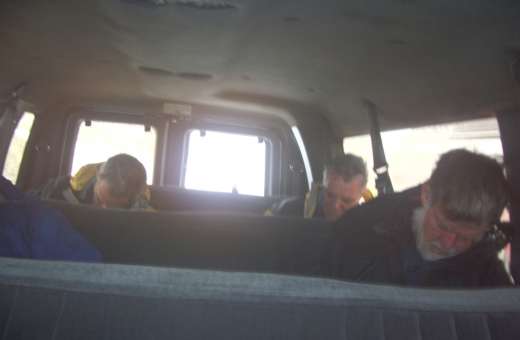 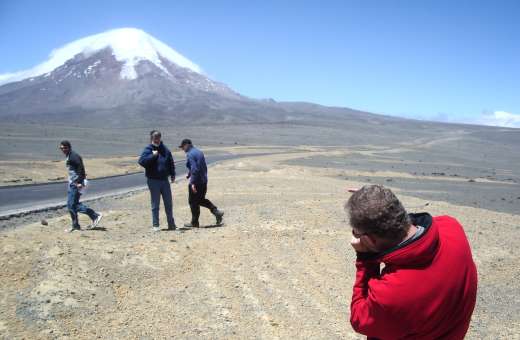 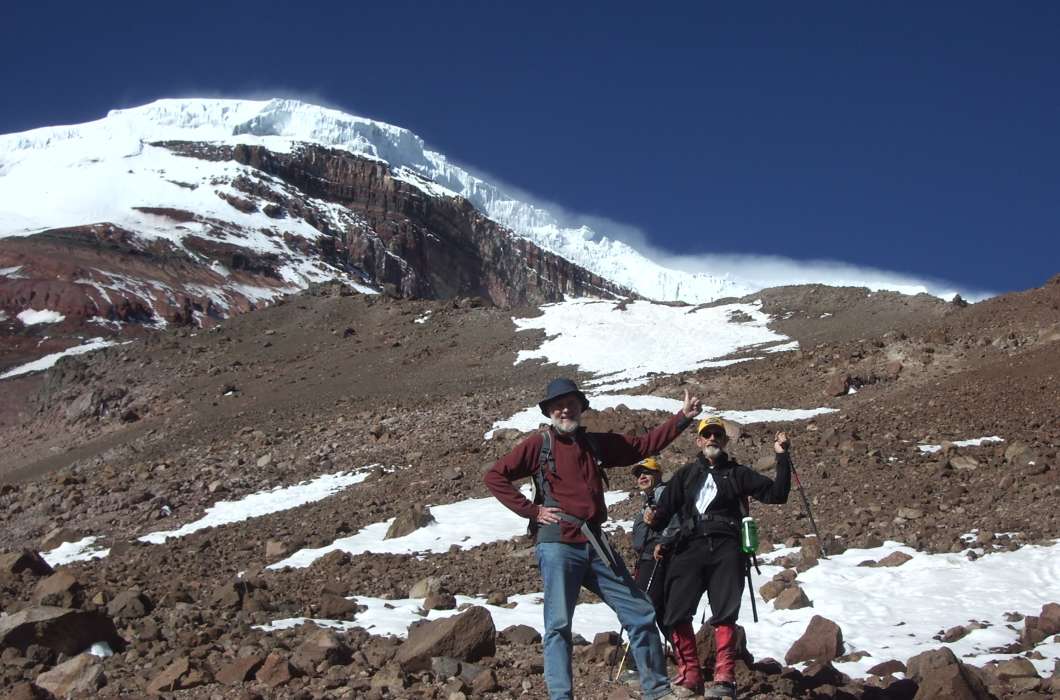 In driving rain, white out and moderate winds we headed off in a vain attempt. After two hours, walking in surprisingly beautiful lush swamp-like scenery we admitted defeatt, turning back towards the van. It was a great hike and we were all exausted from the walk when we got back. Happy to have given it a good shot, we returned to the hut, picked up Chris and drove down to Banos. Banos means bath, and at a low altitude of around 1800m the group all felt strong, Ray even went for a run!! Today is the second to last day of the expedition and this will be the last dispatch. The group has split, Dave and Chris have hired mountain bikes and ridden down a 1000m vertical ride and will catch a local bus back. The rest of the group have gone uphill above town to have a closer look at the active volcano puffing ash...

So this is Mark, Edi, Ray, Dave, Chris, Peter and Graham signing off from a highly enjoyable Ecuadorian Volcanoes Expedition..... 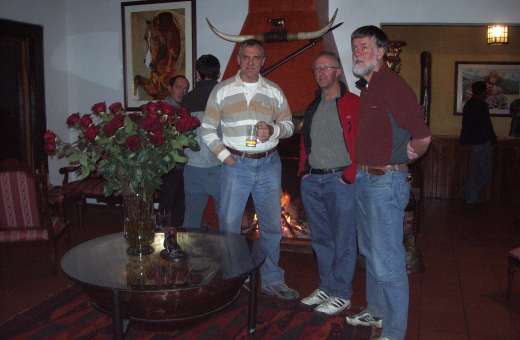 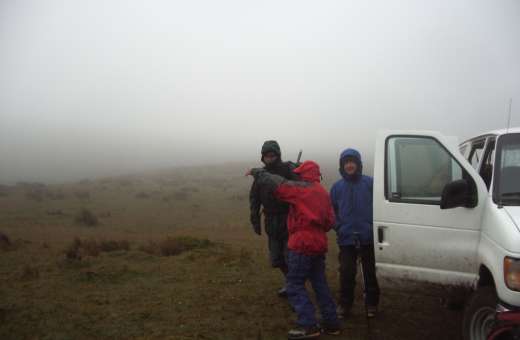