29 December 2007 - Arriving into Indonesia
I met Jamie Clarke from Canada in Jakarta today, December 29th 2007. After initial gear checks we went on a city tour with a mission: to find a climbing wall so we could practice our jumaring techniques. We did manage to find one and much to the amusement of the locals sweated our way up the wall in the hot 35 C temperatures. Later than evening, we flew to Nabire on the island of Papua. It was a long night of flying and stops including breakfast in Biak, a small coastal town in the middle of nowhere.

31 December 2007 - Nabire
Arriving in Nabire we finally met our Indonesian agent and unfortunately he had some bad news. The helicopter was being repaired and they were waiting for a part to arrive. So we spent New Year’s Eve eating the delicious local cuisine and exploring the small town. Being a dry town and Muslim (free of alcohol), we never made it to midnight! 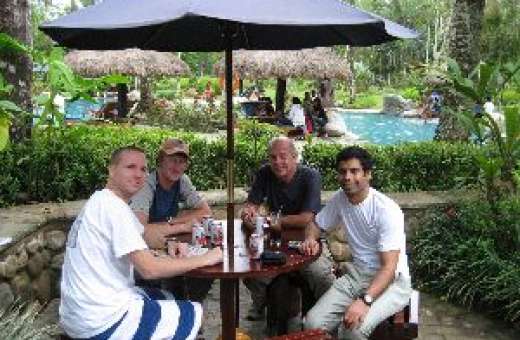 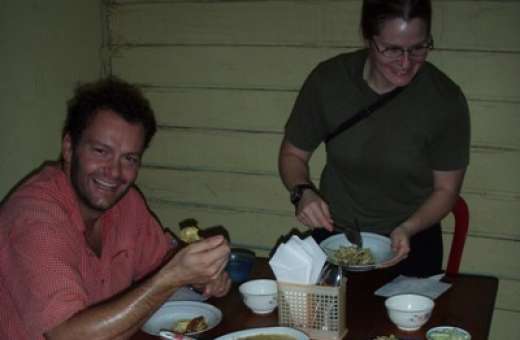 1 January 2008 - Nabire locals
Happy New Year!! Today we took a drive around town, had a tasty lunch of all sorts of local foods, many of which we had no idea what they were and were quite frankly too scared to ask. We went to the beach for a swim and a body surf in the afternoon and we turned out to be the local entertainment with everyone gazing at us in disbelief. We stood out being completely white skinned, and very obviously the only tourists in the area. The locals would stare intently, then we’d smile and they’d smile and wave. We felt like movie stars. But the friendliness of the locals was outstanding and we really enjoyed talking with some of them as they practiced their sometimes excellent English.

Helicopters take a long time to repair in Indonesia! 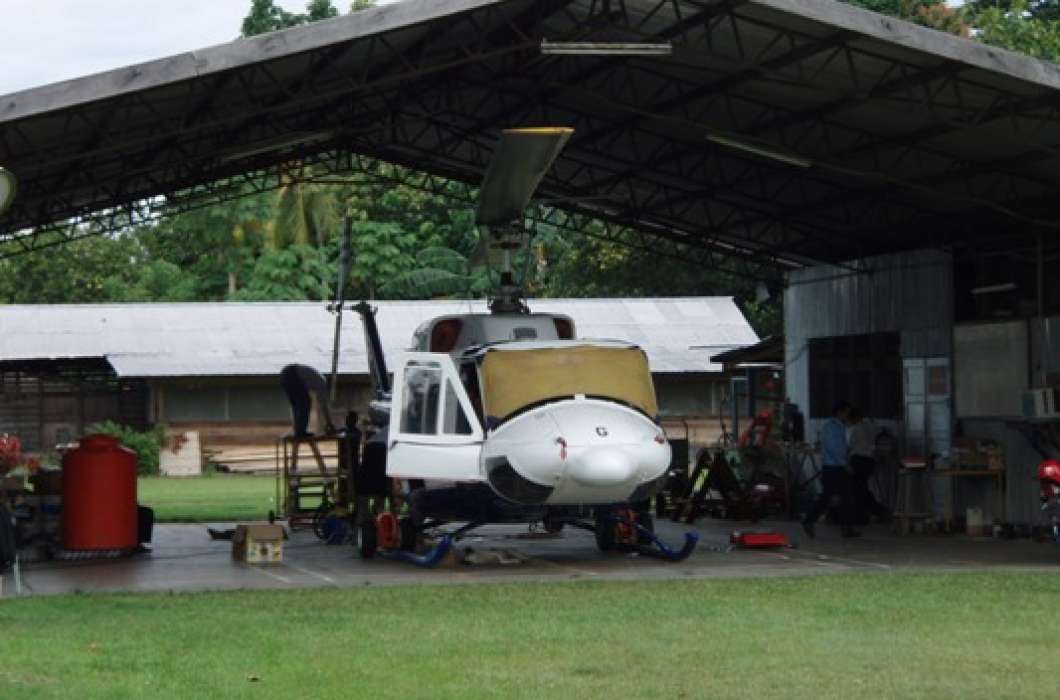 5 January 2008 - Directly to Carstensz Basecamp
Yee Hah!! Today we flew in from Nabire (at sea level) to Base Camp at 4,200m, in a helicopter. It was an interesting hour flight over the thick jungle. I have never seen a pilot smoking a cigarette while flying before, especially while sitting on an oxygen bottle!! We flew low over the Freeport Mine and then into the landing site at Base Camp.

The altitude didn’t feel too bad and after setting up the tents we went for a hike up towards Carstensz to check out the route to the wall. We rested, ate and prepared our gear for the night ahead. 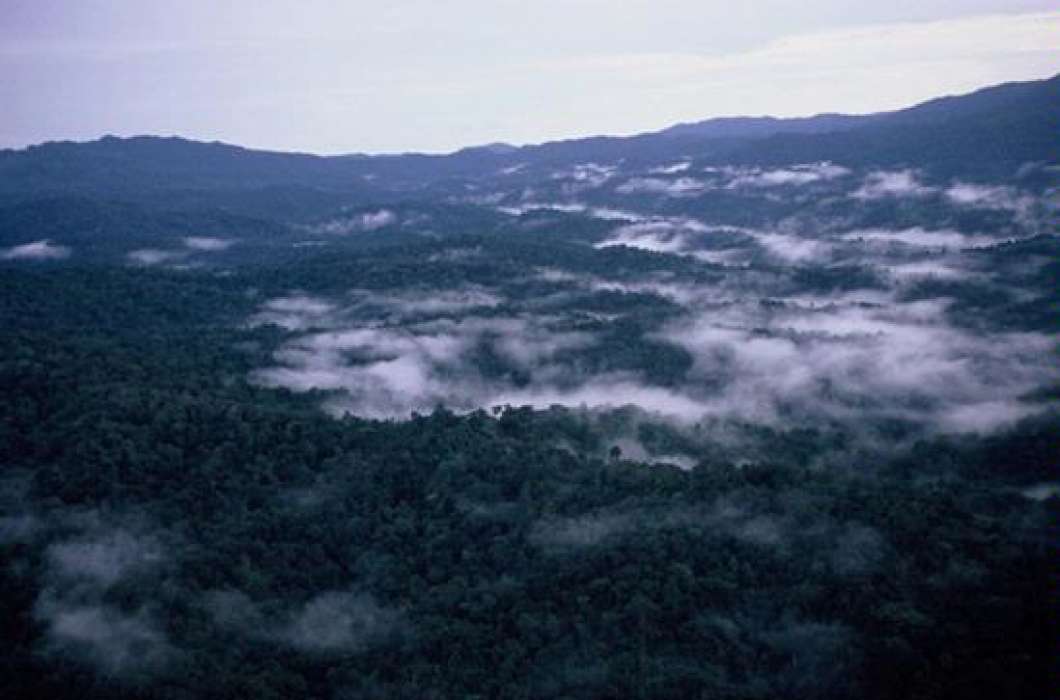 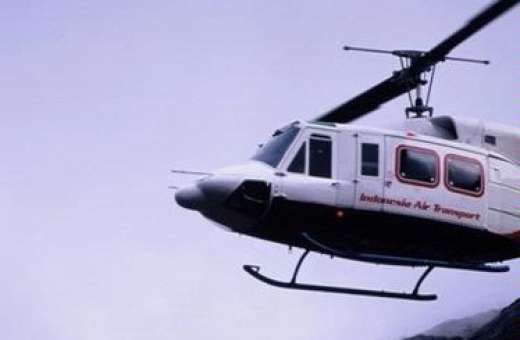 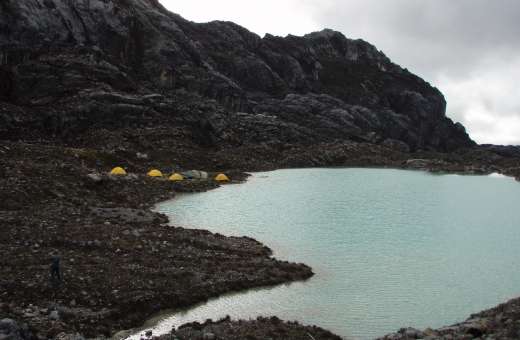 6 January 2008 - Summit day!
We left BC at 3am. It took an hour for the hike to the start of the fixed ropes and then it was highly enjoyable climbing on the fantastically featured and grippy limestone rock. The glow of the mine almost lit up the wall as we climbed into the dawn. As we climbed higher the small glaciers on Ngga Pulu, the second highest mountain in Papua, and East Carstensz came into view. It’s a shame to think that within 10 years these glaciers will probably be gone. When we reached the ridge we were in the mist and cloud and after climbing the ridge for a ways came upon the Tyrolean traverse. A rope fixed over a 30m gap with a hundred metres or more space below. Scary, but not that difficult we crossed it without incident and an hour later after some more interesting scrambling brought us to the summit and the highest point on the Australasian Continent. 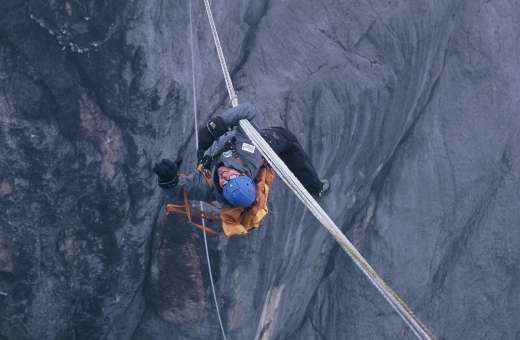 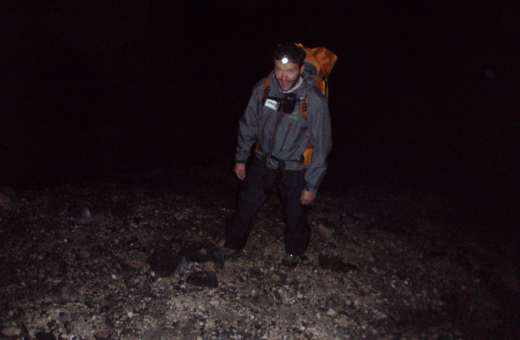 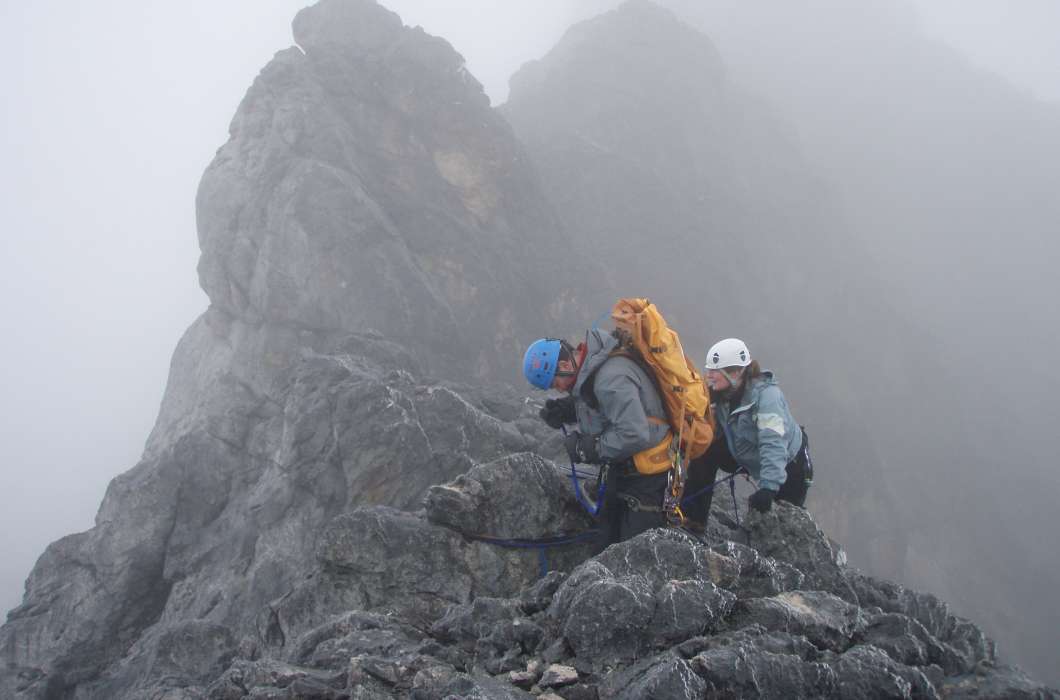 It took us 5 hours from Base Camp. It was Jamie’s seventh summit, so we got loads of photos and hung out there for 30 minutes in the mist.

We then turned our attentions to the descent with the weather looking threatening. But 3 hours later we were brewing up a cup of tea in Base Camp and before  we could finish it the rain had returned. Timing is everything!! 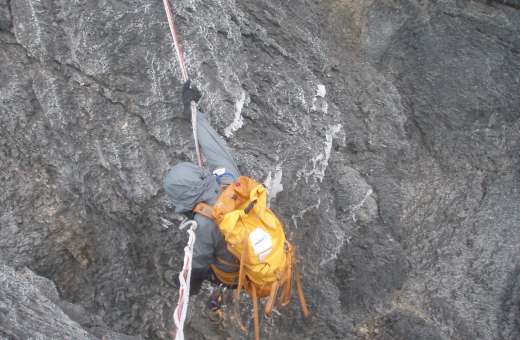 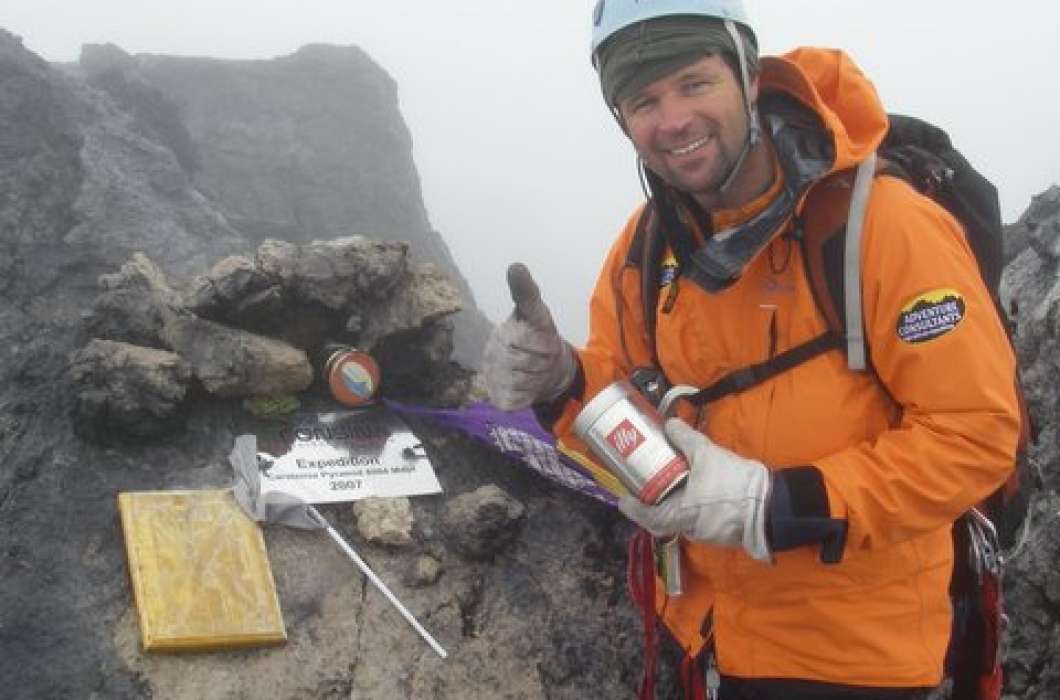 7 January 2008 - Enjoying our surroundings
With another day to spare and great weather we headed back up towards Carstensz and turned up the valley to explore the glacier on East Carstensz Peak. It was a stunning walk and a nice day. Another group of unguided climbers were making an attempt on Carstensz with a local guide. They got to the Tyrolean in 11 hours then one member got stuck upside down on the ropes. Worried for their safety we decided to head up and help them down. Several hours later we all stumbled into Base Camp. It was a timely reminder that Carstensz is the more technical of the Seven Summits and shouldn’t be taken lightly.

After a bite to eat we headed down valley and after significant delays and hold ups, made it out to Timika for a welcome meal and shower at the Hotel Sheraton……what an adventure! 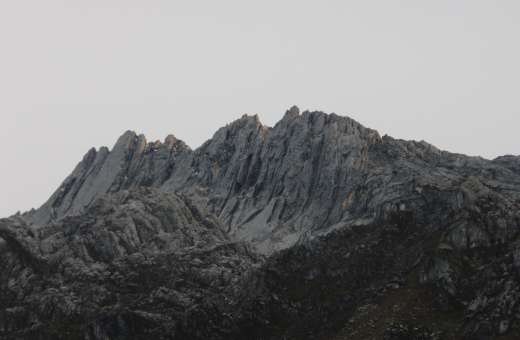 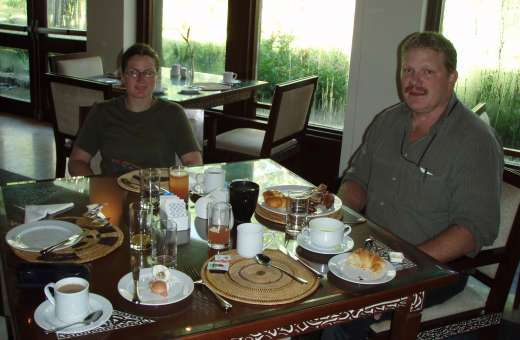 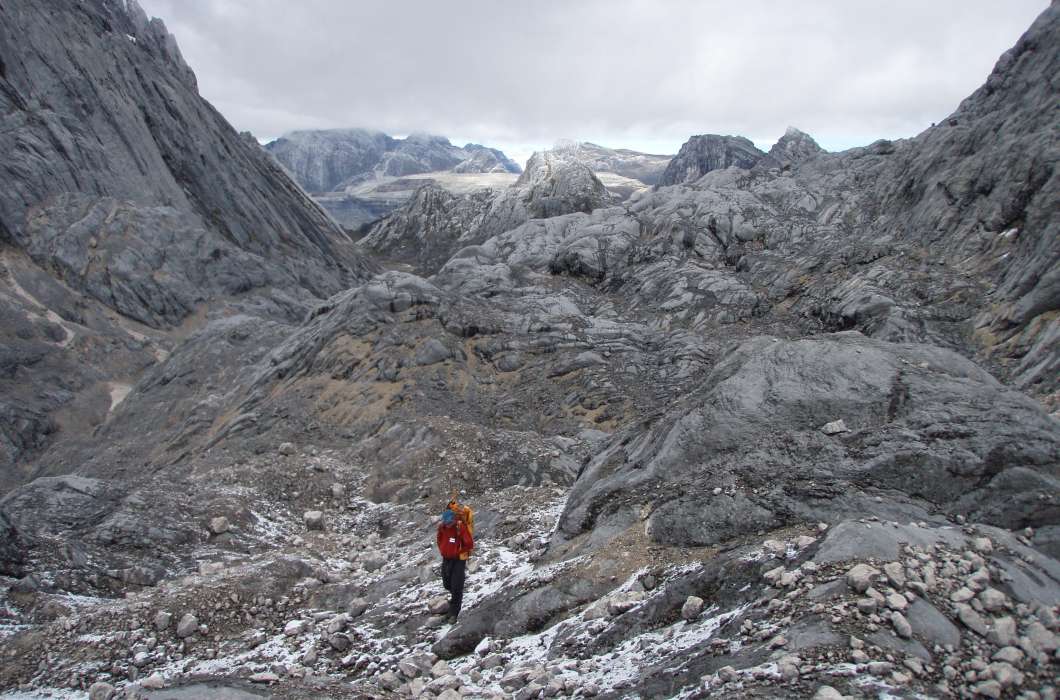