In the Antarctic summer season of 2013/14, Adventure Consultants operated an expedition to explore the peaks of the Antarctic Peninsula. Meeting in Ushuaia on 30 December the team first sailed across the infamous Drake Passage before making landfall at Port Lockroy.

All images courtesy of Phil Wickens

30 December 2013
The team had a very good day today - they went through tents and stoves and each member's individual kit, then up on the glacier to do some practice with snowshoes, roping up and roped travel, then crevasse rescue. Afterwards, they all met at the yacht club, prepared some meals for the Drake Passage, had drinks on the yacht and then went out for an excellent team meal. So it's been a long long day but everyone is excited to start the journey tomorrow!

3 January 2014
We sailed to Puerto Williams on New Years Eve and arrived in time to see in the New Year. New Year's Day we hiked to the top of Cerro Bendera for a mixture of good views, driving snow, strong winds and sunbathing... such is the weather in these parts. We have just arrived in Puerto Toro before we head out towards Cape Horn. 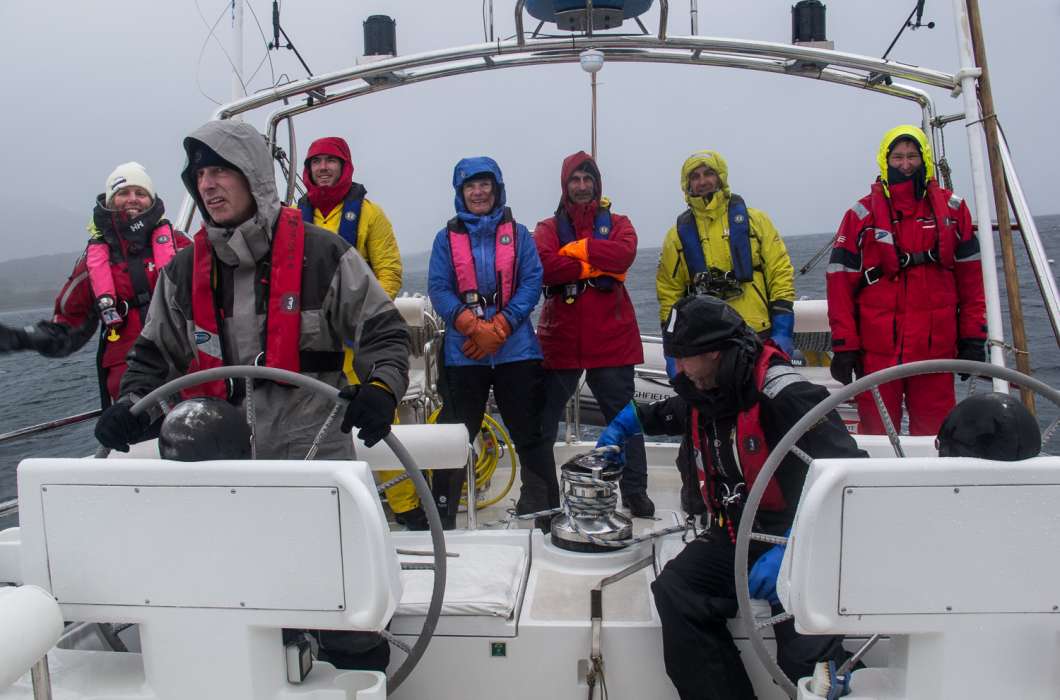 7 January
We have now sighted land -Smith Island - after a good but at-times-bumpy Drake Passage. Everyone is well and all looking forward to reaching solid land!

8 January
Superb day here in Antarctica. We anchored alongside the wreck of the Goeverneron on Enterprise Island in the early hours after a good crossing of the Drake and today hiked up and traversed the picturesque summits of Enterprise Island.

10 January
We have had another excellent two days, despite far-from-perfect weather. Yesterday the whole team successfully summited Spigot Peak at the entrance to the Errera Channel - after a long zodiac ride we hauled the boat up a beach, then climbed past a gentoo penguin colony before following a ridge full of nesting chinstrap penguins and then the rocky and snowy face and ridge to the summit. It all felt like a real adventure, squeezed in between two snowstorms, and it was nice to get back to our zodiac and brew up a hearty soup in a small snow cave on the beach before heading back to Icebird.

Today Neville, Warren and Phil made the first ascent of a couloir to an unnamed summit above Paradise Bay - ten full pitches of steep snow climbing above a spectacularly crevassed glacier (the Avalanche Glacier) and a long long descent down snow-slopes and a snow ridge, followed by an airy traverse above the yachts to reach a rocky viewpoint and then the Argentine Base Brown and a pick-up in the zodiac by Darrel. 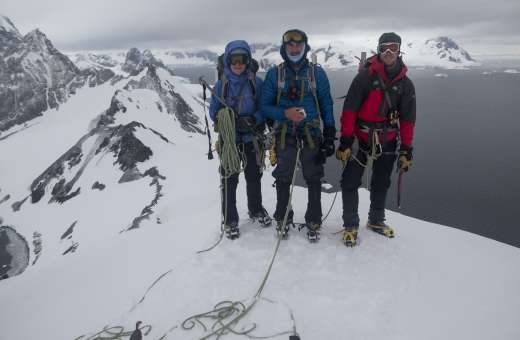 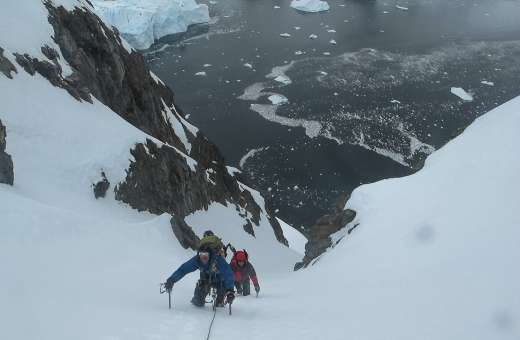 16 January
We are back on Icebird after camping on Kershaw Peaks for 3 days. As we hauled our sleds up the glacier it started to snow and didn't stop at all, so we were unable to climb the mountain due to avalanche danger.

However, everyone enjoyed camping high on the mountain and overlooking the very broken and extremely active Miethe Glacier, which rumbled away all night as it spawned numerous icebergs, as we played cards inside the tents.

We have now dried out on Icebird and are anchored off Hovgaard Island, watching heavy snow falling outside. There is an Emperor Penguin close to the yacht, so everyone has paid this rare guest a visit and we are looking forward to the arrival of some good weather in the next 24 hours or so. 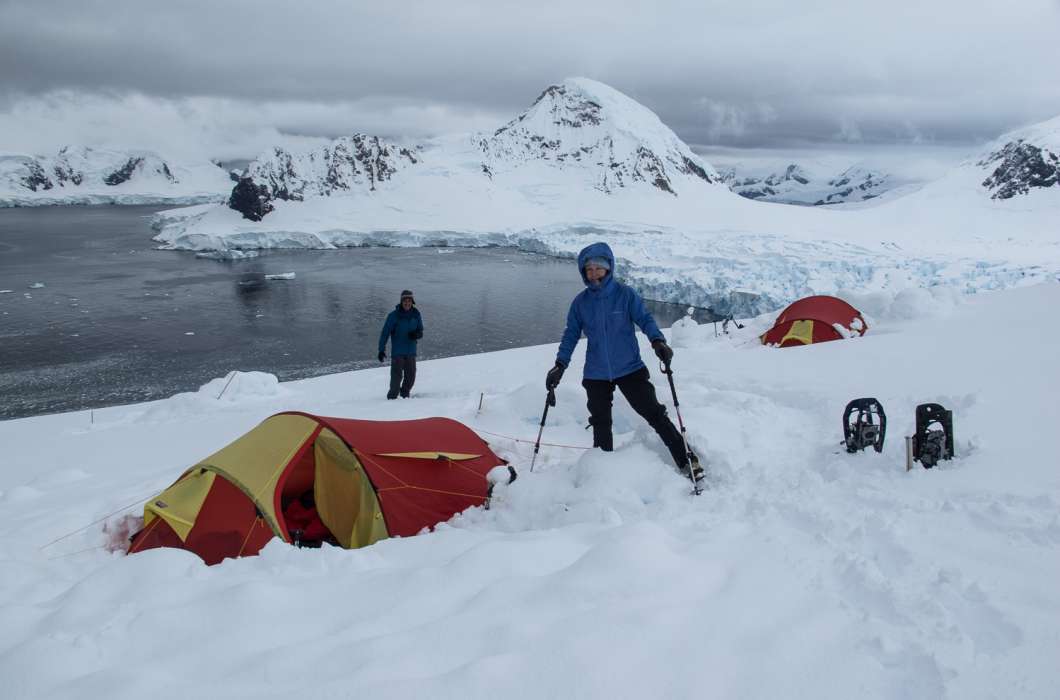 21 January
We've all had a pretty busy few days in Antarctica. After sailing through the Lemaire Channel, Jackie, Neville, Warren and myself were dropped off below Duseberg Buttress, where we climbed a steep glacier to reach the main glacier that leads to the summit of Mt Scott. This was followed without difficulty, except for the physical toil, to the summit, from which we were rewarded with magnificent views.

We then sailed to the former British Base Faraday, now run by the Ukraine as Akademik Vernadskiy, where we were warmly received for an evening in the famous bar.

After spending the night at Vernadskiy, Neville, Warren and myself were dropped off in Waddington Bay. A small, unnamed peak on the north side of the bay was reached by ascending a crevassed glacier, and was then climbed by the rocky east ridge - a good alpine excursion. 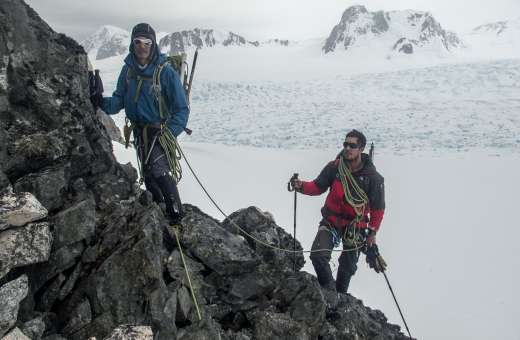 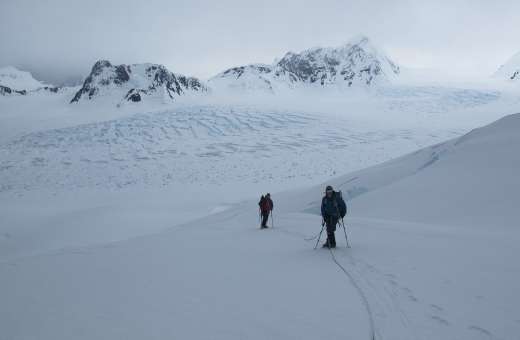 After spending the night in the old British Radmussen Hut we attempted Mt Mill. The frozen surface initially made travel easy, and we quickly made progress up the lower slopes and past some beautiful crevasse scenery, but the steep and exposed summit slopes proved too icy to continue beyond the second bergschrund.

We are now anchored behind Port Lockroy, having sailed north through the Lemaire Channel. The guys are visiting this historic base and museum, and later we hope to climb Jabet Peak.

Phil for the Antarctic Peninsula Team 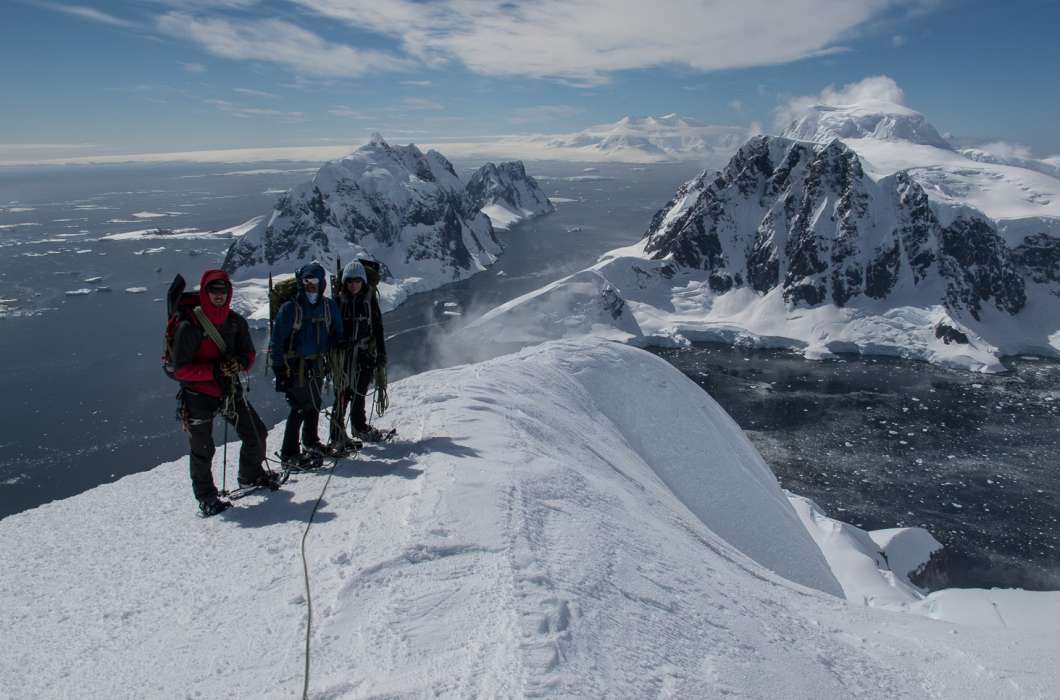 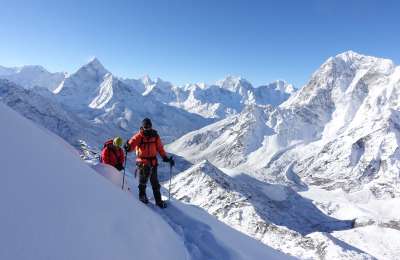 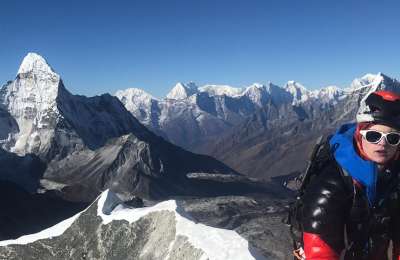 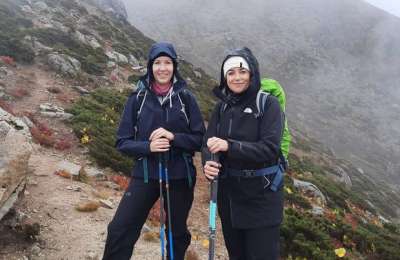 Dispatches - Lux Everest Base Camp Trek 2022
A very happy birthday from all of us at Adventure Consultants to Anne! What a wonderful way to celebrate....